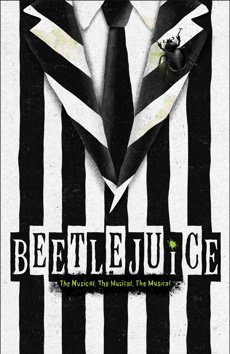 A show about death.
Advertisement:

The Musical adaptation of Tim Burton's Beetlejuice, which started its run in Washington D.C. in 2018 and officially opened on Broadway on April 25, 2019. The book was written by Scott Brown and Anthony King, and the songs provided by Australian comedian Eddie Perfect.

After perishing in a gruesome accident, loving couple Barbara and Adam Maitland return to their home as ghosts and find that it's now under the ownership of the recently widowed Charles Deetz, his Goth teenage daughter Lydia (who's still having a difficult time coping with the loss of her mother), and Delia, Lydia's inept life coach who's secretly in a relationship with the girl's father (a notable change from the film, in which she was simply her stepmother). Desperate to scare the family out of their beloved house, the Maitlands end up enlisting the help of the perverted and loudmouthed ghoul Betelguese, who eventually strikes up a wicked plan involving Lydia...

The musical alters and rearranges many aspects of the original story, but stays true to the zany, gothic visuals and absurd Black Comedy of Burton's classic. It was nominated for eight Tony Awards for the 2018-2019 season, including Best Musical; it didn't win any. Thanks to a huge fanbase, the show seemed to be getting a comeback during 2019-2020 Broadway season and was to run through June 6, 2020 to make way for the Hugh Jackman-led revival of The Music Man, which would take its place that fall and was contractually obligated to be staged in the Winter Garden Theatre.

However, due to the Broadway shutdown from the Coronavirus Disease 2019 Pandemic, the show missed their closing date; the shutdown began mid-March 2020 and ended in the fall of 2021. Producers had begun looking for a new venue for the show, as well as scheduling a national tour for 2021 or developing a proshoot, but no plans were set in stone, leaving the show's run on Broadway - rather appropriately, given the text - in limbo.

However, in September 2021, as Broadway shows began to reopen, it was revealed that Beetlejuice would return to Broadway in April 2022

, moving to a new location. The show reopened on April 8, 2022 at the Marquis Theatre.

Oh, and full disclosure: it's some tropes about death!