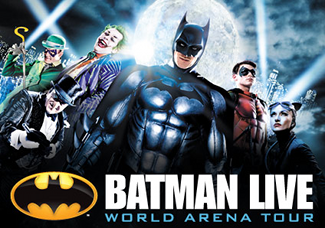 Batman Live is a 2011 arena show written by Stan Berkowitz and Alan Burnett. The play tells the story of Bruce Wayne meeting and teaming up with Dick Grayson, a.k.a. Robin, for the first time. It's an elaborate and highly detailed stage production, featuring circus acts, hand-drawn animation and Wire Fu. And some serious horror.

When Bruce Wayne spends an evening at the Haly Circus with commissioner Gordon, they're introduced to The Flying Graysons, who turn out to be the victims of a protection racket by Tony Zucco. When the Graysons are murdered during their trapeze act, their son Dick ignores commissioner Gordon's orders to hide in Wayne Manor, and goes after Zucco with the intent of murdering the gangster. As it turns out, Zucco is working for the Joker — but by the time Batman figures that out (from the twisted grin on Zucco's corpse) he's set off the alarms of every supervillain in town. Knowing that they won't stand a chance against Batman alone, the Riddler proposes a supervillain team-up to kill Batman once and for all. Catwoman, Two-Face and the Penguin reluctantly agree.

Meanwhile, Harley Quinn and The Joker take over Haly Circus, murder its cast and capture Dick. When Batman comes to free his ward, the Joker flees, and Harley is shipped off to Arkham Asylum kicking and screaming. Impressed with Dick's perseverance and acrobatics, Bruce tells Dick about the murder of his own parents, the inspiration he found in the film Zorro, and how he wants to devote his life to fighting evil. He decides to let Dick in on his secret: he is the Batman, and he intends to teach Dick how to make villains pay without resorting to murder.

Meanwhile, the Joker breaks into Arkham Asylum and takes over the building. Batman decides to pursue his archenemy, and with the help of Alfred, Dick secretly tags along. Batman has to face his enemies in the centre of madness.

The play stays close to the Batman canon, and includes very detailed factoids on the franchise's gadgets and villains — as well as the sleekest Batmobile seen yet.