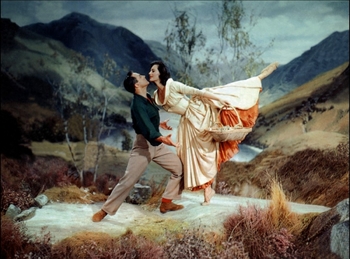 Brigadoon is the 1947 musical play that established the duo of Lerner and Loewe as second to Rodgers and Hammerstein in names to be reckoned within American musical theatre.

Though the story of Brigadoon is not exactly original, being basically the German fairy tale Germelshausen reset in Scotland, it inspired many other stories of Vanishing Villages, including the manga/anime Brigadoon: Marin and Melan.

In the eighteenth century, the Highlands of Scotland were plagued with witches, horrible women who were putting the devil into people's souls. Therefore Mr. Forsythe, old minister of the village of Brigadoon, went out early on a Wednesday morning to petition God for a miracle to protect their village. From then on, the village and its people vanished to the outside world, reappearing only for one day every hundred years. The price for this miracle was that Mr. Forsythe could never return to the village.

The story, however, begins in 1946, when two hunters, Tommy Albright and Jeff Douglas, lose their way in the Highland mist and find a town not on the map. They come to MacConnachy Square, where preparations are under way for the wedding of Charlie Dalmrymple to bonnie Jean, the younger of Andrew MacLaren's two daughters. While the weary Jeff is invited to the hospitality of Meg Brockie, who sells milk and cream in the square, Tommy accompanies Jean's older sister Fiona to gather heather for a wedding from a nearby hill.

Tommy finds the MacLaren family bible and is puzzled by the dates of birth and marriage given within: although Jean does appear to be five and a half years younger than Fiona, why are the years of their birth over two centuries ago? And is today, the date of Jean's marriage to Charlie, really supposed to be May 24th, 1746? Fiona, who has obviously fallen in love with Tommy at this point, directs him to the town's schoolmaster, Mr. Lundie, who tells Tommy and Jeff all about the miracle, including the condition that it will be broken forever if someone of Brigadoon were to leave its borders. Outsiders like Tommy are free to leave if they like, except if The Power of Love compels them to stay. Everyone is happy in the village, Mr. Lundie says.

But Harry Beaton is not happy. Jealous of losing Jean to Charlie, he draws her into a wild sword dance at the wedding. The dance suddenly breaks off, the wounded-looking bride runs to her groom, and Harry cries out that he is leaving Brigadoon and putting an end to the miracle. All the men of the village race after him.

Harry Beaton is stopped from leaving the town, but the evening of the wedding day proves to be his funeral. Jeff confesses to Tommy that he accidentally caused Harry's death, and tells him that in a few weeks he can forget all this and be married to his girlfriend. Tommy, despite his heartfelt feelings for Fiona, tries to tell her that their love will fade in time. Fiona disagrees, saying, "I think real loneliness is no' bein' in love in vain, but no' bein' in love at all." Soon the day ends and they apparently part forever, but four months later, in a New York City bar, he realizes she was right.

A film version of this musical was made in 1954, directed by Vincente Minnelli and starring Gene Kelly as Tommy and Cyd Charisse as Fiona. (MGM spent a great deal of money on it, only to have another musical that they made, which they spent relatively little money on and had very little faith in, become their smash hit for that year.)