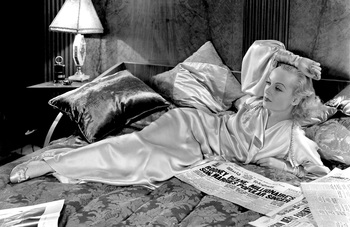 Being depressed never looked so glamourous.
Brief Moment (1933) is a Columbia Pictures drama, starring Carole Lombard and Gene Raymond. Based on the S. N. Behrman play of the same name, the film was directed by David Burton.
Advertisement:

Abby Fane (Lombard) and the rich Rodney “Rod” Deane (Raymond), are truly in love even if his snobby family isn’t quite convinced of Abby’s intentions. They’re married anyway, and after six months and a hangover too many, Abby is tired of Rod’s love of drinking, partying, and drinking, all in that order, everyday, all day. As a former working-girl, Abby knows that Rod is wasting his potential on his rich excesses, but Rod isn’t the working type and his failed attempts at holding down a job create a divide between the newlyweds.

This film displays the following tropes: