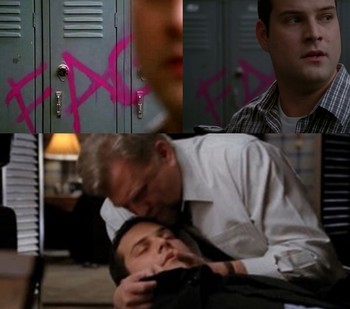 "It's not always the way it is in plays. Not all faggots bump themselves off at the end of the story!"
— Michael, The Boys in the Band

A common trope, often done as a commentary on Homophobia, this is when LGBT characters are Driven to Suicide because of their sexuality, either because of internalized homophobia (hating themselves) or experiencing a miserable life because of their "deviant" gender or sexuality: having to hide who they are, not finding a stable relationship, homophobia from other parties, etc.

The trope may be more common in older works, as a matter of Values Dissonance or for an exception to the Hays Code allowing homosexuals to be shown in media, as long as they were miserable. However, it is still Truth in Television: LGBT individuals are still at higher risk for suicide, even in the Western world. To wit, some 40% of transgender people have attempted suicide, as have 19% of intersex people.

It is one way for a show to invoke Bury Your Gays, but may have worse implications by suggesting that not only must gay characters die but that it must be a stereotypically dishonorable method in suicide, and also that by choosing to kill themselves they are acknowledging how their existence is wrong.

In terms of being Driven to Suicide, this may be considered a Sub-Trope but often has different motivation. The reason for the suicide must be connected to being LGBT+ and so it is more focused on this aspect of the trope, particularly the miseries of gay life and toxicity of society that enables it.

This is a highly dangerous trope as "the more frequently someone is exposed to suicide, the more at risk they themselves are[;] a community that has been bombarded with depictions of suicide should itself be more prone to it." Also, Stanford are researching the trope

Related to Bullied into Depression.

No Real Life Examples, Please! As a Death Trope there will be unmarked spoilers.

Jason tries and fails to get his boyfriend to run off with him. His refusal is the final straw that leads him to overdose.

Jason tries and fails to get his boyfriend to run off with him. His refusal is the final straw that leads him to overdose.