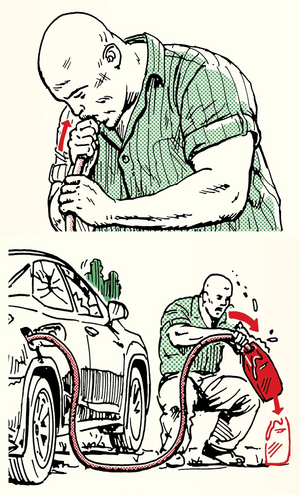 Man, the Internet has visual guides for everything!
Gas siphoning is an old trick used by many people. It involves removing gasoline from a car or tank using a long hose with one end in the tank while the user sucks on the other end to create negative pressure so the gas will flow through the tube. It's a rather unhealthy practice though, as often the user will wind up getting gas in their mouth or even swallow some of it.
Advertisement:

In both fiction and real life, there are criminals who utilize this practice to steal gas out of other people's cars, leaving their tanks empty. However, these days more modern vehicles come equipped with safeguards that prevent this from happening. Either way, it's gross, but at the same time effective if done right. It's still possible to siphon gas in this way from other gasoline-powered machines such as a lawn mower or chainsaw, and is sometimes necessary if gasoline has sat in the machine while unused and has gone bad.

This trick is also quite common in post-societal collapse settings. Where there's lots of unused and broken vehicles lying around (Post-Apocalyptic Traffic Jam is probably a goldmine), and fuel is definitely coveted and needed to run other machines that need gasoline and the like. Such as generators, tools or actual working vehicles and etc.

Don't Try This at Home. Gasoline is toxic and it's possible to swallow some by accident. You can also develop pneumonia if it gets in your lungs.

If you need to siphon gasoline, kits are sold for the purpose which include a hand-held pump, thus eliminating the need to suck on one end of the hose.