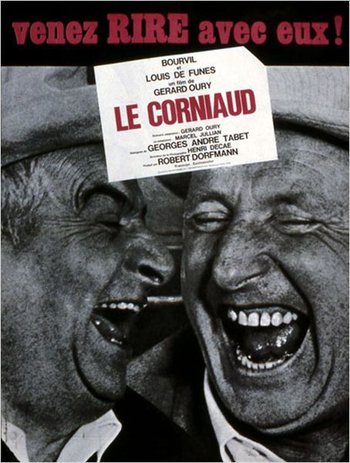 The Sucker (Le Corniaud in French) is a 1965 French-Italian-Spanish comedy film directed by Gérard Oury and starring Louis de Funès and Bourvil.

Antoine Maréchal (Bourvil) is leaving Paris to go on holiday in Italy when he has a car accident with Mr. Saroyan (De Funès). He thinks his vacation is ruined, but the next day Saroyan offers him to drive a Cadillac from Naples to Bordeaux. Actually, Saroyan is a mob boss and he has hidden heroin, stolen gold and precious stones, including the biggest diamond in the world, the Youkounkoun, in the Cadillac.

The film was a smashing success in France upon release, and was topped at that by La Grande Vadrouille the following year, which brought Oury, de Funès and Bourvil back together once again.

The Sucker provides examples of: