Green Around the Gills 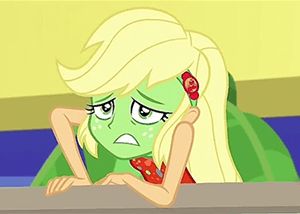 Does anybody have a barf bag...?
Nausea isn't always easy to detect in another person in real life. Sometimes you can tell by how pale they look, but they might be pale for another reason (natural coloring, lack of sunlight, makeup, other unrelated sickness).
Advertisement:

In cartoons, however, you can tell right away as the character's face turns green. This is usually followed by vomiting, either offscreen or on. Expect this to happen if a character has just been through a wild or fast ride (typically a roller coaster), eats or smells something gross, or thinks about something unappealing (sexual or otherwise). Motion sickness can also result in this, especially seasickness. Expect a long groan and maybe a Circling Birdies motif to accompany this trope.

This is somewhat based in reality, as some people's skin does turn a fairly greenish hue when they're nauseated.

May happen as a result of Universal Poison or I Ate WHAT?! Sometimes Played for Laughs when the character is supposed to be green anyway. If the character has fur it may overlap with Through a Face Full of Fur.

Not to be confused with Sickly Green Glow, although they may be related. Compare Sickness Equals Redness and Drunken Glow.

See also Green Is Gross for when green is used for gross things.