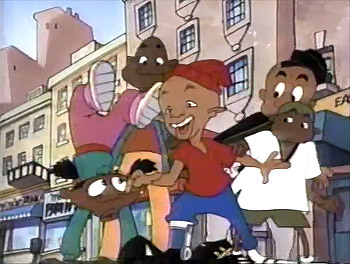 Waynehead was a short-lived Kids' WB! animated series created by American actor Damon Wayans. It was co-produced by Warner Bros. Animation and Nelvana, airing 13 episodes as one full season from 1996 to 1997. The show starred Damien "Damey" Wayne, a young boy from a poor background who had to wear a leg brace for his club foot. Along with his friends, he had to contend with bullies using humor. This was based on Wayans' own childhood in the Chelsea neighborhood in the New York City Borough of Manhattan. Actors featured in the show included Orlando Brown, T'Keyah Crystal Keymáh, Jamil Walker Smith, and Tico Wells. Some of Damon's siblings such as WB veterans Shawn and Marlon, as well as Kim also had roles in the series. Despite the show's low ratings and its swift cancellation by its original network, it was moved to Cartoon Network and aired from 1998 to 2000.

The show was never released on home video, and thus only way people can watch it is through recordings. Then on April 21, 2021 Warner Bros released digital downloads of all of the episodes through Amazon and Vudu, just a six month shy from the 25th anniversary.