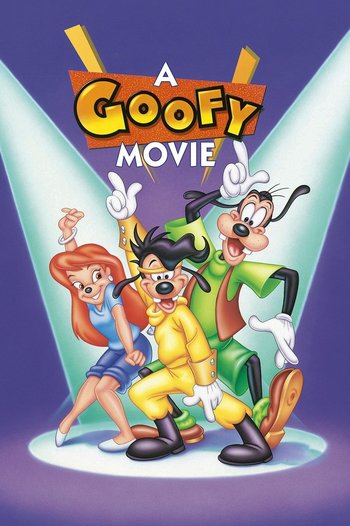 It's hard to be cool when your dad is Goofy.
"If we listen to each other's heart
We'll find we're never too far apart
And maybe love is the reason why
For the first time ever we're seeing it eye to eye..."
—"I2I" by Powerline (Tevin Campbell)
Advertisement:

A Goofy Movie is a 1995 animated film from Disney, starring, of course, Goofy. It's a loose Spin-Off of Goof Troop, making it the only other feature film spin-off of a show from The Disney Afternoon after DuckTales the Movie: Treasure of the Lost Lamp. It's also, to date, the only theatrically-released, single-narrative feature film to star a character from the Classic Disney Shorts.

After his son Max gets into trouble on the last day of school, single father Goofy becomes worried that they haven't been spending enough time together and decides to take him on an impromptu father-son road trip. Unfortunately, not only does Max want nothing to do with his amazingly embarrassing father but their trip interferes with his plans to go to a party with his crush Roxanne. Not wanting Roxanne to think he's rejecting her, he lies that Goofy is friends with Powerline, a Michael Jackson-esque pop superstar whose concert she'll be watching on pay-per-view at said party, and that the reason he won't be at the party is because they're going to Los Angeles to join him on stage. Hilarity Ensues.

The film is best remembered for giving Goofy a significant amount of Character Development from a broad slapstick joke character to a loving Bumbling Dad, with plenty of touching father-son bonding moments throughout, all without sacrificing any of the comedy. Though not a part of the Disney Animated Canon (its animation was farmed out to Disney's branch studios in Australia, Canada and France, who had animated Goof Troop and later assisted on some of the studio's late '90s features), its popularity among fans of '90s Disney animation is comparable to that of the films which were and is certainly greater than that of the show it was spun off from.

The film was directed by Kevin Lima, who would go on to direct Disney's Tarzan, 102 Dalmatians and Enchanted. It was enough of a modest box office success to earn a decently-received Direct to Video sequel, An Extremely Goofy Movie, in 2000.

Left or Right? (A Goofy Movie)

Depressed over discovering that Max changed the route of his map, Goofy decides to give one last chance to Max to redeem himself at a junction. Sadly for him, Max sticks with his plan

Example of:
Secret Test of Character

Left or Right? (A Goofy Movie)

Depressed over discovering that Max changed the route of his map, Goofy decides to give one last chance to Max to redeem himself at a junction. Sadly for him, Max sticks with his plan