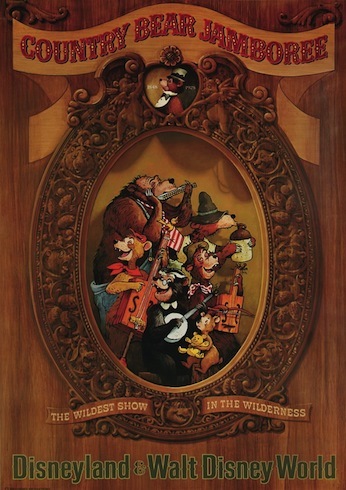 "Gimme a little intro there Gomer"
"Howdy folks. Welcome to the one and only original Country Bear Jamboree, featuring a bit of Americana, our musical heritage of the past. But enough of this chit chat, yick yack, and flim flam. Just refrain from hibernating, and we'll all enjoy the show...because we got a lot to give."
— Henry Bear
Advertisement:

Country Bear Jamboree is a Disney Theme Parks attraction that debuted at the Magic Kingdom in 1971 as an opening day attraction, Disneyland from 1972-2001 and Tokyo Disneyland in 1983. Originally developed by Marc Davis as part of the failed Mineral King ski-resort concept, the Country Bears hold the distinction of being one of the last Imagineering projects Walt Disney would see concept art for before his death.

On stage at Grizzly Hall, emcee Henry leads an eclectic group of singing bear performing acts playing a variety of classic country tunes, occasionally heckled by a group of talking trophy animal heads and culminating in the tone-deaf Big Al not knowing when to quit resulting in a rousing finale to try and smother his dissonant tune out. In addition to the regular show, two seasonal programs were also created: the Country Bear Vacation Hoedown and the Country Bear Christmas Special. However, only the Japanese version of the show still rotates these versions in. One of the more beloved original Disney attractions, it received assorted tie-in material and a feature film, The Country Bears in 2002.

The attraction includes examples of: