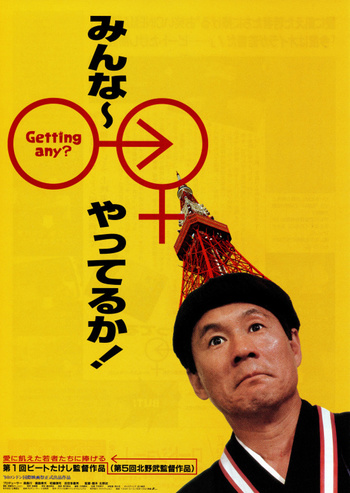 Asao wants a car. Why ? Because he's sure to attract ladies and have sex with them in the car! So he sets out to buy one. But it doesn't work. So maybe he'll go on a plane, because he thinks he can have sex with a stewardess. But he needs money. So he sets out to rob a bank! But he needs a gun for the heist to happen. So he plans to go to a gun factory in order to make his own gun! Scratch that, maybe he wants to act in a movie in order to earn money ?

Getting Any ? is Takeshi Kitano's return to his comedic roots. After some films which dealt with various yet serious topics, he delivers us a sex comedy which contains absurd/surreal humor, characters with unpredictable personalities, and ridiculous situations which rarely make sense. This film is a straight-up comedy, and easily stands out from other Kitano films.