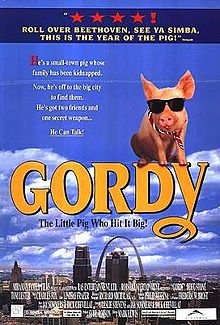 A 1995 movie in which a piglet goes on a search for his family and along the way, he meets a country-singing girl with no mother and a rich boy with no father (Hey, it's a Disney-distributed movie!). Eventually, Gordy becomes famous.

The film was a failed attempt at providing an acting vehicle for Country Music singer Doug Stone, who also sang many of the songs in its soundtrack (including "More Love", which was a hit single for him). Stone's singing career flatlined not long afterward, but this movie was not a factor.