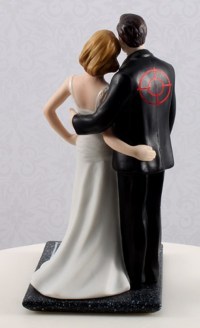 The bride registered at Target.
This is a marriage in which one partner enters a relationship with their significant other in order to run a con on them. Quite often the goal is to steal all of the mark's money, whether by divorce, murder, or good old fashioned embezzlement; information, framing the mark for a crime, or looking for an opportunity to kill the mark are also popular goals.
Advertisement:

This may lead to falling In Love with the Mark if they develop romantic feelings, though that's actually surprisingly rare - most people who would have fallen for their target do so before the relationship gets serious, and a Con Man who goes into a relationship looking to score usually knows better than to start getting emotional.

Sub-Trope of Marriage of Convenience. Compare Prank Date for a more low-key alternative.

May overlap with Til Murder Do Us Part, Honey Trap, or a particularly vicious Gold Digger. This is the standard operating procedure for the Black Widow.

As a common motive in mysteries, beware of unmarked spoilers below.