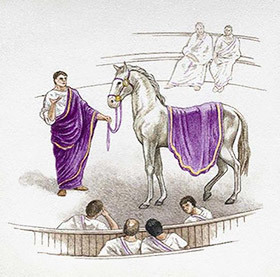 "If a horse's ass can be Count, why not the whole horse?"
— Vorkosigan Saga
Advertisement:

One of the surest signs that the king, president, or CEO has gone completely off the deep end is when he appoints one of his pets to a senior position within the government or company.

Don't dare to question Incitatus — he outranks you! (What's that, Mr. Incitatus? Why yes, the person who wrote the above paragraph is being disrespectful!) Sir, I regret to inform you that the horse has decided you are to be executed for rudeness.

This trope can also be Invoked by rather more cunning rulers; either as a symptom of Obfuscating Insanity, a way to install a Sock Puppet in a position of power ("Well, Incitatus agrees with me, so I'm afraid it's two votes to one"), or both. The second of these overlaps with Loophole Abuse: there Ain't No Rule you can't make a horse consul!

Also, it doesn't necessarily have to be an animal — making a statue a vice president would also qualify. If you're lucky with this variant, you'll be dealing with a Companion Cube which will prove surprisingly competent as long as it stays funny.

The new appointee may also be the Puppet in Consulting Mister Puppet. Closely related to Pet Heir, the next branch down the crazy tree. See also Crazy Cat Lady. Not to be confused with the Australian progressive metal band of the same name, though they did naturally name themselves after the Trope Namer.

Toby the Eagle is one of three members of the town council (his handler Roy being one of the other two). It's apparently very common for animals to hold government positions in Alaska.

Toby the Eagle is one of three members of the town council (his handler Roy being one of the other two). It's apparently very common for animals to hold government positions in Alaska.