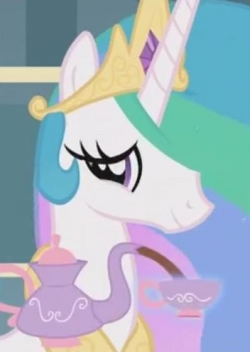 Not even gravity defying teapots can make her enjoy it.
Advertisement:

A My Little Pony: Friendship Is Magic Fanfic by Skywriter, centered around Princess Celestia and run on pure hilarity.

But the truth is, Celestia hates tea. She's hated it since day one. She drinks it only because everyone has come to assume she likes it over centuries of her drinking it so as not to offend those who gift it to her and prepare it. But when her faithful student Twilight Sparkle returns from an ambassadorial mission with a present of a new tea flavor, Celestia decides to come clean with her millenia-old secret. What's the worst that can happen?

Has a follow up of sorts which reveals the original story to have been written by Twilight Sparkle. It's considerably less comedic and considerably more meta. It can be found here

An unofficial continuation by JadeCriminal

A Short Story by Twilight Sparkle contains examples of: