Continued from "The Return of Harmony Part 1". 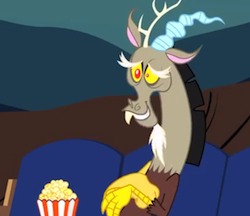 He's got the best seat in all of Equestria.
Twilight Sparkle: We've got the liar, the grump, the hoarder, and the brute! That just about covers it!
Special Guest Star: John de Lancie as Discord
Written by M.A. Larson
Advertisement:

When we last left our heroes, Twilight's friends had all fallen under the influence of Discord and become their opposite selves: the honest Applejack is a compulsive (and transparent) liar, the generous Rarity is greedily obsessing over a boulder she thinks is a giant diamond, the fun-loving Pinkie Pie is a grump, the kindly Fluttershy is a Jerkass, and the loyal Rainbow Dash has run out on her friends. Equestria is doomed!

Twilight, the only one of the group who was not corrupted, starts to call out Discord on not playing fair in his little "game" by removing the labyrinth prematurely; Discord points out that he never said the Elements of Harmony were in the hedge maze, and that Twilight misinterpreted his riddle and fell into his trap as a result. He stays around just long enough to mock Twilight and "the magic of friendship" before leaving to cause more chaos.

Twilight finally has an epiphany about the meaning of Discord's riddle, and concludes that the Elements of Harmony are hidden where her first adventure with her friends began: Ponyville. She drags the others back to Ponyville, which is showing Discord's influence: among other weirdness, buildings are randomly floating, the dirt roads are turned into soap, and day and night cycle seemingly at random. The attitude of Twilight's friends (which is getting progressively worse) isn't helping things at all, especially when they decide to play keep-away with her copy of The Elements of Harmony: A Reference Guide.

Twilight, her patience with her "friends" wearing thin, finally gets her hooves on the book, and finds the Elements hidden inside. She forces the Elements onto the others (with Spike acting as a hasty stand-in for Rainbow Dash) and heads out to confront Discord, who seems resigned to give the ponies a shot at defeating him. Twilight powers up the elements, there's a familiar glow of power, and...

Without the bonds of friendship, and because Rainbow's power has no effect with Spike, the Elements are powerless, and Twilight's former companions leave in a huff. Twilight, utterly dejected, finally falls under Discord's corruption; she despondently walks home through the surreal madhouse that is now Ponyville, convinced that her friends (and any hope of defeating Discord) are lost for good.

Twilight Sparkle: With friends like you... who needs enemies?

When Twilight gets home, however, she finds Spike in quite a state, nauseated from burping up countless letters from Princess Celestia. They're copies of all the friendship reports she's sent to the princess during her stay in Ponyville. Reading over them, Twilight is reminded of her lessons of friendship, which breaks Discord's corruption and realizes Discord was trying to distract them from what's important, as he knew they were after the Elements and did whatever he could to stop them from using them, and upon learning how it was wrong to not focus on making friends from the day she first came to Ponyville, is inspired to redouble her fight. Tracking down Applejack, Fluttershy, Rarity, and Pinkie Pie, she frees them from Discord's influence by using a memory spell to remind them of all their good times. When they find Rainbow Dash clinging to a cloud that she thinks is Cloudsdale, the five endure a harrowing aerial chase before finally returning her to normal.

Once again, Twilight Sparkle and her friends are set to take on Discord, who fails to realize that they've broken free of his influence.

Discord: Will you ever learn?
Twilight Sparkle: I'll tell you what we've learned, Discord! We've learned that friendship isn't always easy, but there's no doubt it's worth fighting for!

Discord remains smugly confident that the Elements of Harmony are still powerless, only to learn otherwise when they hit him head-on, trapping him in stone once more. Back in Canterlot, the bearers of the Elements receive much-deserved congratulations from Princess Celestia... as well as a new stained-glass window commemorating their defeat of Discord.

This was the final episode to have direct creative input from season 1 showrunner Lauren Faust. She would serve as an executive producer for the rest of season 2 before leaving the show entirely by season 3.