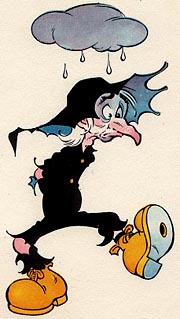 Mental sunblock personified.
Olaf: Hands down, this is the best day of my life! And quite possibly the last...
Elsa: Oh, Olaf! Hang on, little guy.
Olaf: [gasp] My own personal flurry! [giggle]
— Frozen (2013)
Advertisement:

A cartoon and comic trope. A character having a bad day, or who is particularly depressed, will have their own small dark cloud following them, often raining and occasionally hitting them with lightning.

The more depressed they are, the more it will be just rain; lightning, particularly a lot of it, often indicates an angry mood.

Compare to The Stormbringer and Fisher King for this trope on a much grander scale.

Daffy creates what turns out to be one of these with his rain-making machine...

Daffy creates what turns out to be one of these with his rain-making machine...