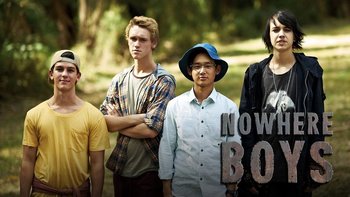 What happens when an arrogant sports-fanatic, a socially-clueless but intelligent dork, an anti-social, sarcastic emo and a food-obsessed popular kid find themselves lost together in a world where no one knows who they are? Worse, that world is their own hometown, but everything is just slightly different, including the fact that there's no record they exist?

That's Nowhere Boys, a 2013 show about what happens when four schoolkids with nothing in common are thrown together, after an accident on a school excursion in the Australian bush. When Jake, Andy, Felix and Sam find their way back into town, they are forced to solve the weird mystery about their seeming erasure from existence. Like a fun version of The Breakfast Club with a distinct sci-fi flavour, it is a show distinguished by great character development and clever dialogue pulled-off by strong young actors.

The first season was accompanied by an online game Nowhere Boys: The 5th Boy

. In it, you play as a boy separated from his father while lost in the bush, who wakes up and finds himself in a mysterious realm with some similarities to the location of the series. He is attacked by a mysterious entity called The Darkness, who seeks to destroy him because "order must be restored", and guided by a voice claiming also to be trapped there.