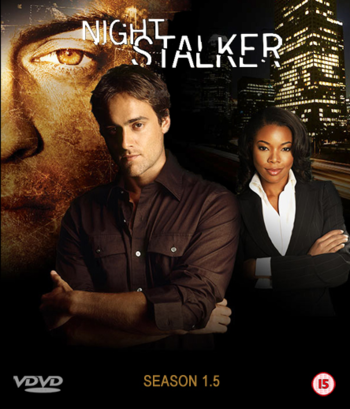 Carl Kolchak (Stuart Townsend) is here depicted as an investigative reporter whose reputation was shattered when his wife was killed by a supernatural entity, and he was blamed in spite of his protests, and committed to a mental asylum. After being released, he moved to Los Angeles and joined The LA Beacon, a local newspaper. Kolchak now investigates supernatural phenomena, hoping to piece it together and figure out who killed his wife. The rest of the main cast consists of his coworkers; his boss Tony Vincenzo (Cotter Smith); Perri Reed (Gabrielle Union), the skeptical head crime reporter who develops an Odd Friendship with Kolchak; and Jain McManus (Eric Junggman), an open-minded photographer.

The series was panned by fans and critics for failing to recapture the original series's charm, tension, or quality, and generally being a bland rip-off of The X-Files with no identity of its own. The series also received extensive meddling from executives who didn't want any monsters in the show, didn't promote it at all, and aired it at 9 PM on Thursday. All these factors resulted in the series being quietly cancelled after only six episodes aired; the remaining episodes were released on iTunes and on various streaming websites, including ABC's own website.