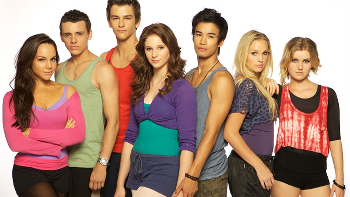 From left to right: Abigail, Sammy, Ben, Tara, Christian, Kat, and Grace
"I always knew in another life, I could fly. So that's why in this life, I dance."
—Tara Webster
Advertisement:

Ever since Tara was a little girl, she knew she wanted to dance. In her hometown, she is known as “the dancer”. So when she is 15, she decides to audition for a position at the prestigious National Academy of Dance. When she is accepted, she thinks her new life at the academy will be spectacular. However, it doesn’t take her long to discover that there is much more to surviving at the academy than just dancing. She soon becomes painfully aware of how far behind she is in her ballet training and that there is a long way to go if she wants to become a principal dancer.

The series became most-watched drama ever aired on its home channel ABC3 during its first broadcast in 2010. Season 2 premiered in 2012, and Season 3 premiered in 2013. The show started airing in the U.S. on TeenNick in February 2012. The Movie came out in 2017.