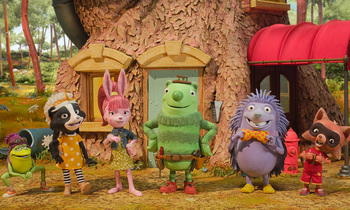 Norman Picklestripes is an American animated Preschool Show that debuted in 2019 on Universal Kids. Combining Broadway-inspired musical numbers, British-provided Stop Motion animation, and a Toronto-based Canadian voice cast, the series aims to teach kids important messages about the importance of community and nature.

The show is set in Plywood Forest, which is inhabited by all sorts of animals. When these woodland critters need a problem solved for them, they turn to Norman Picklestripes (voice of Dwayne Hill), a green, sweater-clad bear-like fellow who is none other than the son of Mother Nature Herself. A can-do handyman with a tool in his hand and a song in his heart, Norm readily tackles every problem his often-demanding animal neighbors have for him. Helping him out in his efforts are his circle of friends, which include a neurotic but lovable porcupine named Bob (David Berni), an artistic hairstylist skunk named Bixie (Bryn McAuley), a sassy and fashionable rabbit named Blanche (Stacey DePass), and a young and energetic raccoon named Marco (Alexander Marsh).