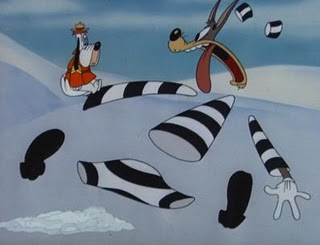 "Who threw that snowball?" "I did."
Advertisement:

The plot of the short is centered on Tex's recurring Wolf character, who has escaped from Alka-Fizz Prison and into the Canadian wilderness. Droopy of the North West Mounted Police is the only "volunteer" who will track him down. The rest of the short is spent on the wolf trying to escape Droopy, to no avail. Because it's a Tex Avery short, Hilarity Ensues.

It's essentially a Denser and Wackier remake of the very first Droopy cartoon, 1943's Dumb-Hounded.