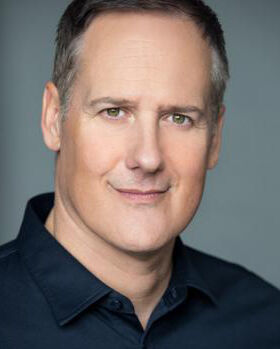 David Berni (December 6, 1970) is a Canadian voice actor and comedian.

Because of his distinctive nasally, laidback voice, David Berni has had numerous roles (both major and minor) in animated series produced in Canada, and also appeared in a significant number of advertising campaigns. His experience in cartoons encompasses a wide variety of shows, including Almost Naked Animals, Detentionaire, Iggy Arbuckle, Mysticons, Ollie's Pack, Rocket Monkeys, Ruby Gloom, and Scaredy Squirrel. He's also appeared as The Other Darrin for characters from Sony Pictures Animation's movies — namely Count Dracula of the Hotel Transylvania movies and "Baby" Brent McHale of the Cloudy with a Chance of Meatballs movies — and in American animator Joe Murray's PBS series Let's Go Luna!. As you can tell by the above shows and characters, he's usually cast in the role of the Cloud Cuckoolander, the Small Name, Big Ego Jerkass, or the beleaguered Hypercompetent Sidekick.

Outside of voice acting, he's also had a few live-action roles, most notably his uncanny portrayal of hockey superstar Phil Esposito, in the 2006 TV mini-series Canada-Russia '72.

Roles from David Berni include: