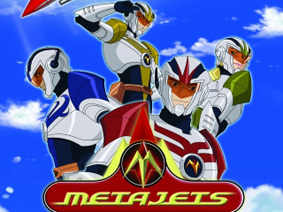 Metajets is a Korean-Canadian action cartoon created by Peter M. Lenkov and David Wolkove and produced by Cookie Jar Entertainment and Sunwoo Entertainment for Teletoon. It ran for a single season of 40 episodes and also appeared on Cartoon Network in the United States as one of numerous Canadian imports present on the channel during the late 2000s and early 2010s.

In 2067, ten years after the Black Cloud war, the world's most powerful cities have been sent to the skies. When the world is in danger, four young Ace Pilots competing in the A.R.C. (Aeronautical Racing Circuit), become the elite flying team known as the Metajets. Under the command of Captain George Strong, chairman of the A.R.C., the pilots work in secret, transforming their race jets into battle jets.

The four pilots consist of:

The biggest threat to the Metajets pilots is the re-surging Black Cloud organization led by General Raven.