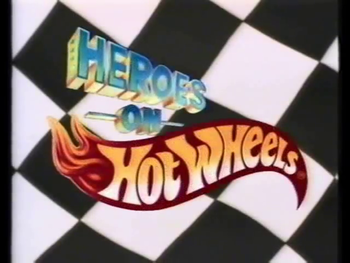 Michel Vaillant is a 1990 French animated series that consists of 65 episodes, each 26 minutes long, produced in France by la Cinq. It was released in the U.S.A as Heroes on Hot Wheels, produced by Jetlag Productions and the former Family Channel, sponsored by Mattel's Hot Wheels franchise (hence the title) and distributed by France 3 Video and Pacific Media Ventures. This is despite the fact Michael Vaillant was a long-running famous French comic series that had nothing to do with Hot Wheels. Michel's name was anglicized to "Michael Valiant". It was broadcast again in France in 1993 and 1998 by France 2, and sold in more than 30 countries.

The show's premise is Michael and his family-run team are going around the world competing in various races, only for their rivals in Team Leader to show up to cheat. The team is often prone to making fantastic modifications of their vehicles that their rivals are always trying to steal or sabotage.