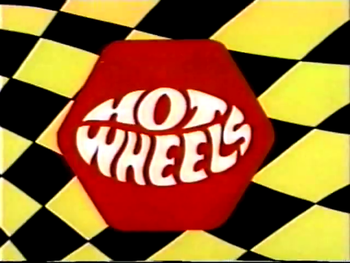 Hot Wheels is a 1969 TV series that was produced by Ken Snyder Properties and Pantomime Pictures, based on Mattel’s then-new Hot Wheels line of diecast toy cars. The show aired on ABC from 1969 to 1971. It had 34 eleven-minute episodes in 17 pairs. During the show's run, the Federal Communications Commission (FCC) received complaints from toy companies, including Topper Toys, who argued that it was actually a thirty-minute commercial for the toys; the FCC obliged by ordering stations to log part of the airings as advertising time.

The series mainly focused on the racing exploits of a high school student, Jack "Rabbit" Wheeler, who led the Hot Wheels Racing Club.

There were also 6 comics made by DC.