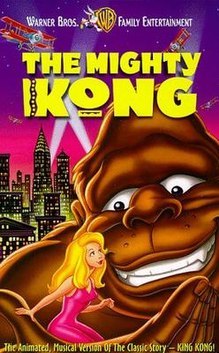 The Mighty Kong is a 1998 Direct to Video animated musical adaptation of the original King Kong film.

The story is the same, only that it has songs and very few character deaths, plus Kong's fights with the dinosaurs are less violent. It also has the addition of a boy named Ricky and his pet monkey.

The film stars Jodi Benson and Dudley Moore (in his final role before his death four years later).