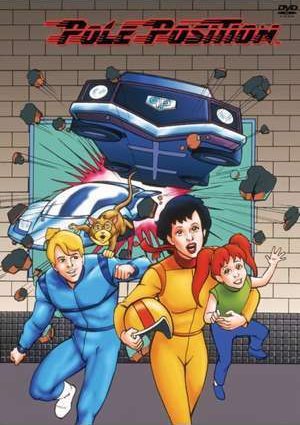 POLE PA-SHI-SHA-UNNNNNNNN!!!!!note Alteratively: Oh, Crap!, DOC BROWN'S DRUNK AGAIN! RUN!!!
"From now on, like your parents were, you are the secret force of Pole Position! "
Advertisement:

Pole Position is an animated cartoon series produced by DIC Entertainment which aired on CBS in the 1980s. Although the cartoon shares its name with the videogame Pole Position by Namco, there is no other connection between the two entities. The name Pole Position is copyright of Namco and used under license, and DIC apparently really wanted to use that name. note Not that the video game had any story to speak of.

The show featured three young sibling crime fighters, Dan, Tess, and young Daisy Darrett, the elder two of whom were stunt drivers and were part of a secret government operation under the guise of the "Pole Position Stunt Show" that was run by their Uncle Zachary. Pole Position itself seemed to be a way to disguise and protect top-secret scientific research. The youths inherited the role after their parents died in an unfortunate car accident. The team is equipped with two high-tech talking vehicles named "Roadie" and "Wheels".

The vehicles featured numerous hidden gadgets like water skis and hover jets. The vehicles' computers themselves are portable and can be removed from the dashboards and carried around using handles, (thus they are often referred to as "the modules"). They are characters that appeared as computer-drawn faces displayed on video screens.