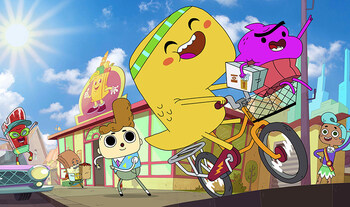 Cupcake & Dino: General Services is a Brazilian-Canadian animated series produced by Canada's Entertainment One and Brazil's Birdo Studio for Netflix and Teletoon. It is the brainchild of Pedro Eboli, a Brazilian animator who also created Cartoon Network Brazil's Oswaldo and would later make Nelvana's Ollie's Pack.

The show follows the titular sibling duo, Cupcake, a little pink cupcake with big dreams and a short temper, and Dino, an excitable yellow dinosaur who is the younger and larger of the two (voiced by Canadian comedians Justin Collette and Mark Little respectively). When not working at the grocery store of their hardworking uncle Chance, the brothers are taking on gigs for their side job — their very own "general services" business, in which they can be hired for any kind of odd job by interested clients (as organized by the pair's lovable manager Hugo). Together, the quirky but industrious pair are eager to take on any work the people of their fair town of Big City have to offer for them, no matter how big or small. Rounding out the cast are Grandma Steak, a piece of steak who is Cupcake and Dino's feisty grandmother (and Uncle Chance's mother); Mayor Vicky, the teenage mayor of Big City and friend of Cupcake and Dino; Peetree Gluck III, an arrogant chicken who runs a rival business to that of Cupcake and Dino; and Uncle Chance's sly business rival Sneaky Stan.

The series was released on Netflix on July 27th, 2018, and Teletoon on September 4th, 2018. A second season debuted on May 3, 2019. However, it ultimately proved to be the series' final season, concluding the show after 26 episodes despite the series garnering some good viewership and plenty of critical acclaim (The New York Times even called it one of the best TV shows of 2018