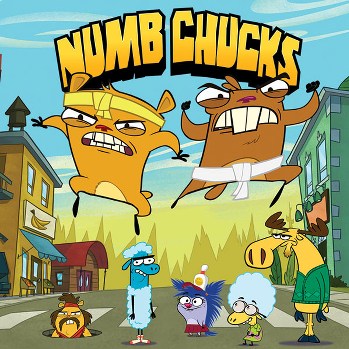 Dilweed and Fungus ain't smart, it's true. But that won't stop them from doing kung-fu!note Top, Left to Right: Dilweed, Fungus; Bottom, Left to Right: Woodchuck Morris, Buford, Quills, Grandma Butternut, Hooves
How much good could a woodchuck do if a woodchuck knew kung fu? Not much.
— The series' tagline

Numb Chucks is a Canadian animated comedy airing on YTV in Canada. It was created by Phil Lafrance and Jamie Leclaire (previously known for Crash Canyon) and developed by Jono Howard (An Ed, Edd n Eddy writer). It was produced by Jam Filled Entertainment and 9 Story Media Group.

The series focuses on two moronic woodchuck brothers named Dilweed and Fungus who live in the town of Ding-a-Ling Springs in a World of Funny Animals. One day, the pair watch a martial arts training video from the legendary kung fu master Woodchuck Morris and become obsessed with kung fu as a result. Inspired by the words of Woodchuck Morris, the duo decide to become great kung fu masters determined to protect their hometown from crime and villainy. But as well-intentioned as they are, neither of the pair are intelligent or competent enough to do very well at martial arts or at heroism.