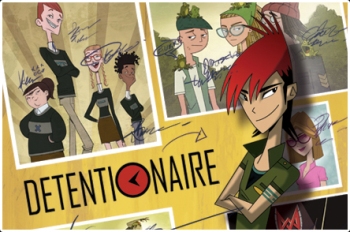 "At 4:15, detention gets out. The only problem is, I'm nowhere near detention right now."
I don't wanna
Take the heat, no
Now I gotta
Go It Solo
I don't wanna
Do the time, so
I just gotta
Take what's mine, whoa
Walking a fine line, keepin' control
Deep in the cut, ready to roll
Are you friend or are you foe?
Now I gotta...go it solo...
— The show's epic theme song. The guitar riffs and "bah bah bahbah babah's" are all optional.
Advertisement:

Detentionaire is a Canadian Mystery Fiction-Conspiracy Thriller cartoon from Nelvana that was created by TV writers Daniel Bryan Franklin and Charles Johnston. It began airing weekly on Teletoon in January 2012, although it had a preview week in the September of 2011.

Lee Ping, an Ordinary High-School Student beginning 10th grade at A. Nigma High School, gets a year's worth of detention for pulling the mother of all school pranks, and on the very first day, no less.

The catch? He didn't actually do any of it.

To make matters worse, his mother, a teacher at his school, has grounded him for the same length of time, leaving him unable to do anything outside of school. Since no one will believe his claims of innocence and he doesn't have any proof of it, Lee must clear his name by sneaking out of detention every day and finding clues that will lead him to the true culprit.

With the help of a circle of close allies, including his best friend Camillio Martinez, goofy exchange student Holger Holgaart, school bully Biffy Goldstein, and the school news reporter Tina Kwee (his crush), Lee searches for the truth behind the prank and tries to catch the real prankster by rubbing shoulders with the various student cliques of A. Nigma High. And while he's at it, Lee finds himself having to avoid all manner of obstacles, such as the tyrannical cyborg principal and former military officer General Barrage, the school's strange hazmat-wearing janitors, and a lizard-like monster called the Tazelwurm that serves as school mascot.

Widely considered to be one of the best shows ever produced by Nelvana and to have ever aired on Teletoon, thanks to its complex plot and engaging writing, surpassing Franklin, Redwall, and Mythic Warriors: Guardians of the Legend. In recent years however, it has faced some competition with Mysticons for the title of being Nelvana's best series.

The show lasted 53 episodes over 4 seasons, and was licensed by Cartoon Network for an American release. The series was canceled on Thursday, January 29, 2015, allegedly due to poor performance in the United States. All 4 seasons are available to view online via Amazon, Tubi, and YouTube via Nelvana's Retro Rerun channel

in America, the latter two being available for free.

There is a wiki.

Not be confused with Detention.

Every episode of Detentionaire opens with an In Media Res sequence of Lee Ping encountering trouble that will occur later in the episode, as a way of teasing audiences of what's to come.

Example of:
The Teaser

Every episode of Detentionaire opens with an In Media Res sequence of Lee Ping encountering trouble that will occur later in the episode, as a way of teasing audiences of what's to come.