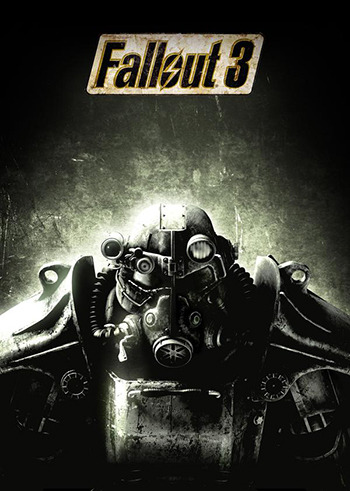 I don't want to set the world on fire...
"I am Alpha and Omega, the beginning and the end. I will give unto him that is athirst of the waters of life, freely."
— James, quoting Revelation 21:6
Advertisement:

Fallout 3, released in 2008, is the third numbered and fifth released game in the popular Fallout series.note It is, however, the fourth game in the official timeline due to Fallout: Brotherhood of Steel being declared non-canon. It was developed by Bethesda Studios, who purchased the rights to the franchise after Interplay Entertainment's bankruptcy. It marked a major shift for the franchise, going from a traditional turn-based Western RPG to a first-person Action RPG, and left the West Coast setting of previous games for a fresh start in the D.C. area.

It's 2277, and Vault 101 is an okay place to live. It's an underground paradise that saved humanity from the Great War two centuries ago, and has been home to everyone within it for generations. Your life is okay, too. Your father is the head doctor and an all-around Nice Guy, and your mother... well, she was probably nice too. You grew up more or less normally, despite the antics of resident bully Butch DeLoria and his gang, the Tunnel Snakes. Your best friend Amata made that easier, even if her father, the Vault's Overseer, is a bit of an over-protective jerk. Still, you're lucky to have grown up here, with the Wasteland far behind the thick Vault door... if it even exists. Nobody knows for sure, because in Vault 101, no one ever enters, and no one ever leaves.

Then, sometime after you turn 19, you find a panicked Amata shaking you awake, hurriedly telling you that your father has escaped the Vault, the Overseer has locked everything down, and Vault Security is out to kill you or worse. She offers you a stolen gun and runs for safety, and before you know it, your peaceful little life is turning upside down - there's a horde of giant mutant cockroaches swarming in through the busted sewage system, Butch is crying on his knees begging you for help, and the Overseer has turned into a tyrannical maniac who will stop at nothing to keep the Vault closed forever. Soon, it becomes clear that you have no choice but to follow in your father's footsteps and escape into the unknown.

As you climb out of the dingy tunnel, security guards peppering the closing Vault door with bullets, you find yourself staring into the radioactive remains of several hundred square miles of Washington DC, southern Maryland, and northern Virginia. This is the Capital Wasteland, and somewhere out there, amid the strange creatures, murderous lunatics, and killer robots is your dad. You must now learn why he left, how the Wasteland works, and discover the impact you're having on it just by being there. Will you reconcile with him, or turn him away? Help people out, or take advantage of them? Save DC... or become its doom?

The game has five DLC add-ons:

The following Game Mods have their own pages:

open/close all folders
Tropes #-C
Tropes D-G
Tropes H-K
Tropes L-O
Tropes P-S
Tropes T-W
Tropes X-Z
"'Associate with men of good quality, if you esteem your own reputation, for it is better to be alone, than in bad company."
Feedback