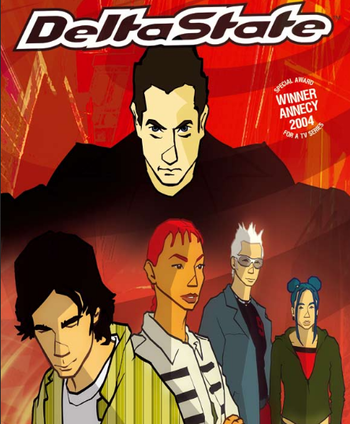 The main four at the bottom, L-R: Philip Graff, Luna Palacios, Martin Gold, Claire Donally
"Four young amnesiacs hold the fate of humankind in their hands. Their mission is to protect you from the 'Rifters' who want to control the human mind. They may appear to be harmless and self-absorbed but they have astonishing, paranormal powers and an invincible motivation: To retrieve the secrets to their past lives, hidden deep in the parallel dimension of the Delta State."
—Professor Robert Brodie, Opening Narration
Advertisement:

Delta State is a Canadian/French animated television series produced by Canada's Nelvana and France's Alphanim (now Gaumont Animation). The series debuted September 11, 2004, on Teletoon's Detour block, but also aired in France from March 9, 2005, on France 2 and Canal+. It ran for a single season of 26 episodes, with designs, storyboards, etc. done in France and shooting and recording performed in Canada.

The show features four roommates in their early twenties named Luna Palacios, Philip Graff, Claire Donally, and Martin Gold. They have no memories of their lives from before they started living together, but their mysterious friend and mentor Professor Robert Brodie has told them all of one very important thing: they all possess psychic powers that grant them the ability to subconsciously enter a lucid dream-like ethereal realm known as the Delta State. With only their strange powers and each other's company, these four young adults must face off against a mysterious group of malevolent beings known as The Rifters, who seek to gain total domination over the collective minds of the human race. At the same time, they also do their best to piece together their past lives from before they all found themselves together in this strange situation.

Delta State was based on a comic book of the same name by series creator Douglas Gayeton that was being produced around the same time as the TV show, but for unknown reasons, the comic ultimately remained unpublished. Regardless, this European-Canadian production is a notable and landmark achievement in the world of television animation for being the first ever TV cartoon to be entirely created through rotoscoping, taking over 27 months to complete. For its unique place in animation, the show won the Special Award for a TV program at the Annecy International Animated Film Festival.