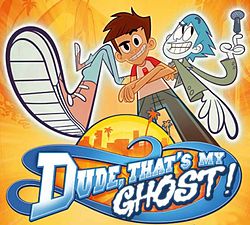 A show of British-French origin, Dude, That's My Ghost! follows the story of Spencer Wright, a young aspiring director and horror movie fan.

After his family inherits the mansion of their distant cousin, the incredibly famous dead rock star Billy Joe Cobra, Spencer discovers that when wearing an object that belonged to Billy, he can see, communicate and interact with Billy's ghost (who is currently haunting the mansion) .

The show had been greenlighted for 52 × 11-minute episodes and airs on Disney XD in the United Kingdom and Ireland. It ran for one season in 2013.

Now has a character page! Nurture it and help it grow!