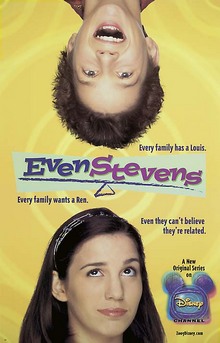 Even Stevens was a Disney Channel series that ran from 2000 to 2003 and is best known now for launching the career of Shia LaBeouf.

The series focuses on the Stevens family. Steve, the father, is a lawyer whose wife, Eileen, serves as a California state senator (the show being set in Sacramento). Their oldest son is Donnie Stevens, a Dumb Jock who obsesses over his hair. Most of the show's plots center on middle child Ren, the family's resident Smart Girl, principal's pet and perfectionist, and youngest child Louis Stevens, the show's king of the Zany Scheme, get-rich-quick stunts and practical jokes.

Advertisement:
open/close all folders
Tropes in the show

The Movie contains examples of:

The opening to Even Stevens, done in stop-motion.

The opening to Even Stevens, done in stop-motion.