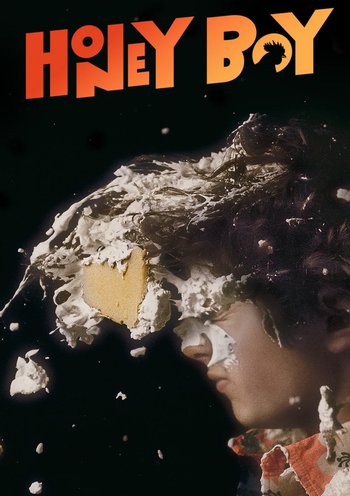 Honey Boy is a 2019 indie drama film directed by Alma Har'el. It follows the story of Otis Lort (Lucas Hedges), a problematic young actor in rehab, though the bulk of it is told in flashbacks that show Otis as a struggling child actor (Noah Jupe) living with his abusive, former rodeo clown father James (Shia LaBeouf).

The film largely acts as a warts-and-all account of LaBeouf's own troubled upbringing in everything but name, its script's very existence a result of LaBeouf writing it as a form of therapy in court-mandated rehab, where he discovered he was suffering from PTSD.

Otis is based on LaBeouf himself (down to select scenes of Otis' acting being heavily reminiscent of past works of his), and LaBeouf's character is based on his own father, with the film's title being his father's real childhood nickname for him. This marks his first feature writing credit, as well as Har'el's feature directorial debut.

Honey Boy premiered at Sundance early in the year before being picked up by Amazon Studios for distribution.