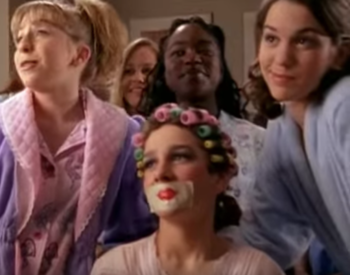 What could be the worst way for a masculine guy to be humiliated? Giving him a feminine makeover of course! Because Most Writers Are Male having a male (typically masculine) character who has the belief that Pink Is for Sissies or Girls Have Cooties forcing them to dress up femininely is the most effective way to torment them. A common scenario of this is, if the guy happens to show up at an all-girls Slumber Party, the girls could capture him and give him one heck of a makeover, with the guy suffering of course (unless of course the guy secretly enjoys it).

This can apply to tomboy girls (like the Unwillingly Girly Tomboy) as well but not as often as guys.

This can sometimes overlap with Dragged into Drag and Gravity Is a Harsh Seamstress but not always. Compare to Pet Dress-Up. Contrast with Real Men Wear Pink and In Touch with His Feminine Side.