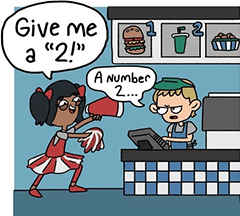 A Comedy Trope where cheerleaders are often shown speaking as if they were cheering in ordinary conversation. They might be doing this as a form of practice, or because they are just too stupid to know any other way of communicating. Alternatively, they might be shown cheering at inappropriate events, such as chess matches.
Advertisement: