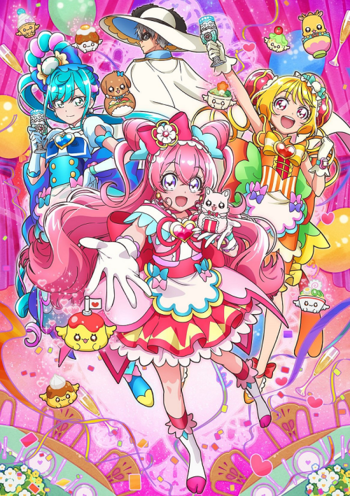 Delicious Party♡Pretty Cure is the 19th installment of the Pretty Cure franchise and the 17th continuity. It is preceded by Tropical-Rouge! Pretty Cure.

The CooKingdom is the origin place of all cuisines from all around the world. However, thanks to a theft incident involving the sinister Bundoru Gang, a group of elusive phantom thieves, the Recipe-bon of the kingdom is gone. Now, three fairies of the CooKingdom must venture to Earth and meet three girls in order to reclaim the Recipe-bon from those phantom thieves. When they cross paths with Yui Nagomi in the town of Oishina City, they grant the little easy-going, vegetable-loving girl the power to become a Pretty Cure to combat the bandits, with Kokone Fuwa, Ran Hanamichi, and Amane Kasainote with her own method of transformation later joining their cause.

Western fans can watch this on Crunchyroll.

Food brings tropes♡ Everyone, gather around and trope to your heart's content!