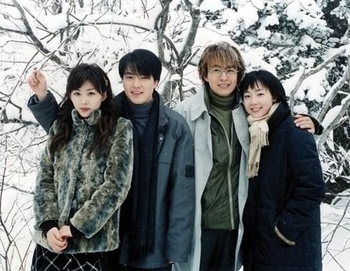 Winter Sonata refers both to the hit South Korean Soap Opera and its Animated Adaptation. It was broadcast on Japan's NHK and has been a major part of the 'Korean Wave' both there and throughout Asia.

The story revolves around the fated love between pretty Yuujin and brooding Joonsang. They first met when Joonsang transfers to her high school, with the secret intention of discovering the identity of his biological father, whose name his mother has hidden from him to the extreme point of removing it from his memory. Armed only with an old, damaged photo of his mother standing between two men (one of whose face's is burned), Joonsang is looking for one or both of those men, as possible candidates. He comes to believe that the father of one of his classmates, Sanghyuk, is also his father (possibly making them half-brothers); to complicate matters, Sanghyuk is Yuujin's friend-zoned best friend. Meanwhile, Chae-lin, the class Alpha Bitch, decides that she will conquer Joongsang's heart.

Despite (or rather because of) their different personalities, the free-spirited Yuujin and aloof Joonsang fall in love, to the chagrin of Sanghyuk and Chae-lin. But during a melodramatic visit to Yuujin's home, Joongsang discovers that she has a complete copy of the photo Joonsang has, with the burned face revealed to be the late father of Yuujin (possibly making Yuujin his half-sister). Now dubious about his conclusions, he decides he confess everything he knows to Yuujin on New Year's Eve, but before he can meet her, he is hit by a truck. The next day, the school receives news that Joonsang has died, leaving both Yuujin and Chae-lin in despair.

Ten years later, Yuujin (now an architect) and Sanghyuk (a radio host) are engaged to get married. But the night of their engagement dinner, Yuujin mets a man who looks eerily similar to the late Joonsang, and becomes so shocked and distraught that she fails to go to the dinner. The mysterious man happens to be Chae-lin's new boyfriend, an American-raised architect named Ming-hyun. Yuujin becomes greatly troubled, exacerbated by a series of coincidences constantly causing her and Ming-hyun to cross paths, and she fears that she is falling in love with him. Although the very open and easygoing Ming-hyun is nothing like the serious, brooding Joonsang, there's just something about how both men are so alike that Yuujin's heart simply can't let it go...