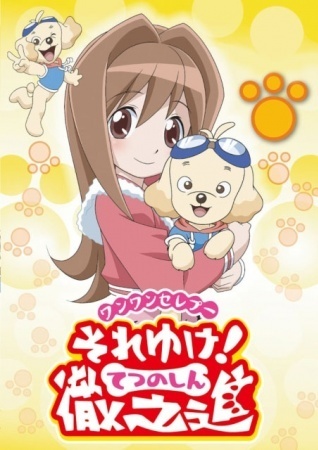 Tetsunoshin is the faithful dog of the Inuyama family, who've just moved from rural Japan to the luxurious (and expensive) Hoppongi Hills after Mr. Inuyama's lucrative IT corporation promises to make the family rich and successful... except, it doesn't. Despite the business's success, the Inuyamas soon find that it isn't enough to support their new lifestyle, forcing them to consider leaving the high life before they've even had a taste of it yet.

But Tetsunoshin isn't having that. Motivated by his love for his owners, especially the daughter Rumi, Tetsunoshin is determined to save his family's finances and secure their place among the celebs of Hoppongi Hills by any means necessary. Helping him are the Hills Dogs, a secret group of stray dogs residing in an alternate dimension inside Hoppongi Hills, who aim to help dogs in need. With their expertise and a little magic, Tetsunoshin will bring in the dough to keep the Inuyamas happy and wealthy.

First airing on January 7 and concluding on December 30 the same year, the show spanned 51 episodes. Fansubs of it can be found on YouTube and elsewhere, though not all 51 episodes have been subtitled as of this writing.

A companion Manga was also printed which coincided with the anime, playing up the more episodic, comedic elements of the story while the show gradually shifted towards longer and more serious plotlines. It is archived here

though unfortunately it remains a strict example of No Export for You as it has never been translated, officially or otherwise.