Anime / Waiting in the Summer 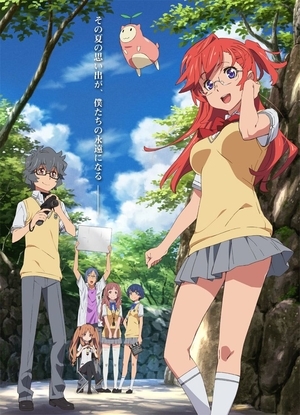 The cast from left to right: Kaito, Remon, Tetsuro, Mio, Kanna, and Ichika. Rinon is the little guy floating in the air.
Kaito: "Summer break was about to start."
Ichika: "One we'd never be able to forget."
Kaito: "An unforgettable summer."
Ichika: "I'm sure..."
Kaito: "...everyone felt the same way."
Ichika: "Happiness and sadness. Pain."
Kaito: "All of it put together in one package."
Ichika: "There'll never be another one like it."
Both: "That summer is about to begin"
Advertisement:

Waiting in the Summer (あの夏で待ってる — Ano Natsu De Matteru) is a 12-Episode Anime and the latest installment in the Onegai franchise (Please Teacher!, Please Twins!).

Kirishima Kaito is an Ordinary High-School Student who likes to film things with his grandfather's old super 8 movie camera. One night while he was out trying new high speed film something terrible happened to him... but when he woke up the next morning, he was in his own house without a scratch on him or any idea how he got home. That same day, a new student transfers to his school, and he can't help but feel that she's familiar somehow.

If you live in North or South America, the series can be legally watched at Crunchyroll

or at The Anime Network

an English dub for this series, due to be released in August 2019.