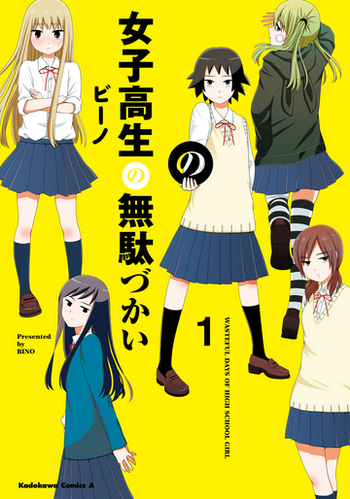 About as deep as high school girls get...note Top to bottom: "Loli" Saku, "Baka" Tanaka, "Yamai" Yamamoto, "Robo" Saginomiya and "Ota" Kikuchi
Hey, guys! Do you want to hear something amazing?
—Baka, moments before saying something not amazing on the anime episode teasers.
Advertisement:

On the first day of school, high school girl Nozomu Tanaka gives nicknames to all of her classmates. For example, her two closest friends geek Akane Kikuchi and stoic Shiori Saginomiya respectively become Ota (as in Otaku) and Robo (as in Robot). When Nozomu demands a nickname for herself, she gets stuck with "Baka" (Moron). This is just the first of many such youthful misadventurous moments to be had in Wasteful Days of High School Girls (Joshikousei no Mudazukai), a comedy / slice-of-life manga by Bino involving several high school girls in a girl's school. It was first published in 2014 in Nico Nico Douga's Nico Nico Seiga section, but started commercial distribution by Kadokawa in the year after.

It received an animated adaptation in July 2019. Sentai Filmworks holds ex-Asia rights to the anime and will stream it in HiDive, its own streaming service. A live-action adaptation by TV Asahi is in the works, and is slated for airing starting in January 2020.

Compare with Daily Lives of High School Boys, a manga with similar comedy and tone, but with boys.