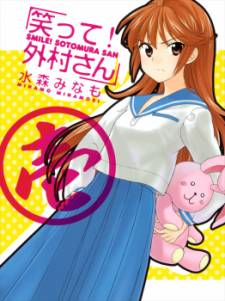 Look how evil she is.
Advertisement:

Natsuki Sotomura is a high-school girl who is feared as a delinquent and avoided by most students. From her light-brown hair down to her long skirt and harsh manner of speaking, she completely seems the part.

But after Sotomura rescues a girl named Haruno from some bullies, Haruno decides to try to get to know her better. Haruno is surprised to find out that Sotomura isn't a delinquent at all and is, in fact, just a very socially awkward girl that's bad with words but wants to make friends. She enjoys cooking, handicrafts, and hitting the supermarket sales. Sotomura also loves cute and fancy things, but she hides these girly traits because she feels they don't suit how she looks.

Haruno's first step in helping Sotomura is to try to teach her how to smile, because whenever she tries, it ends up as a scary grin. Thus begins the story of Sotomura's attempts to make new friends.

Waratte! Sotomura-san ("Smile! Sotomura-san") is a Yonkoma slice of life manga by Minamo Minamori, which was serialized in Honubunsha's Manga Time Special magazine from 2009 to 2017 and compiled into 7 volumes. A spinoff set in the same universe called Hokenshitsu no Tsumuri-san ("Tsumuri-san from the Infirmary") was serialized from 2014 to 2017 and compiled into 2 volumes.