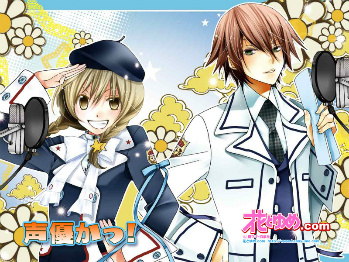 Voice Over! Seiyu Academy is a Shōjo manga series by Maki Minami (creator of Special A), which ran in Hana to Yume from 2009 to 2013.

Fifteen-year-old Hime Kino has started her first year of high school at a seiyuu (or voice actor) school, Hiiragi Academy, the number one school to get voice actors debuted and among the students are celebrities, including two teen idols from Idol Unit "Aqua"—Shuuma Kawai and Mizuki Haruyama—and Kudou Senri, a rising star to fame. Hime dreams of one day being a voice actress on one of the most popular anime series in Japan—"Mahou Senshi Lovely Blazers," but that proves to be a problem as her voice isn't quite suitable for that of a voice actress. In spite of this, Hime is determined to prove that she can be a voice actress.

When Hime displays an uncanny potential to be a voice actress using a "prince-like" voice that captivates audiences, Aqua's producer Haruka Yamada takes notice in the girl and eventually decides to produce Hime as a voice actress—with a catch: Haruka wants to market Hime as a "male" voice actor under the name "Shiro." Hime must crossdress as a boy while dubbing at the studio; if her double life identity is found out, her contract is cut. Hime is initially reluctant to masquerade as a male when her dream is to become a cute "Lovely Blazer" like her idol (and Senri's mother) Sakura Aoyama, but she agrees to reach her dream.