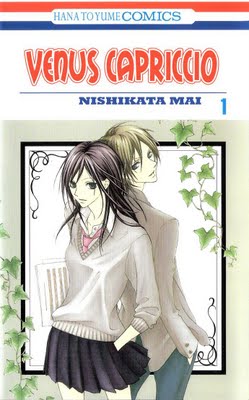 Venus Capriccio is a Shōjo manga series by Mai Nishikata, which ran in Hana to Yume from 2006 to 2008.

Second year high school student Takami Habara and third year middle school student Akira Sasaki are childhood friends, having met through piano lessons. However, they are complete opposites: Takami may have the height and looks of a model, but she's really a rough tomboy, having grown up in a family with four older brothers, and has trouble with dating guys because they are not attracted to her unruly personality. Akira is a guy, but his beautiful bishounen features could fool anyone and he would rather either play the piano or spend time with Takami than to do other things.

Because of Akira's feminine physical appearance, Takami has always thought of Akira as a "sisterly" figure and her ideal of a girl's image rather than seeing him as a guy, but when Akira spontaneously kisses Takami and confesses his feelings to her, Takami must seriously come to terms that Akira is a guy and what her feelings for him are.