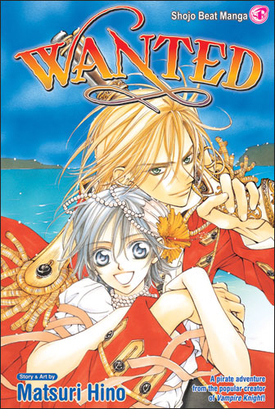 Armeria is an orphan girl who is part of a music group who sings for work. One day, while the group was at Governor-General Lanceman's mansion, she meets Luce Lanceman, the Governor-General's nephew, who lost his parents when he was young and would inherit the Governor-General's position after he passes away. Armeria fell in love with Luce, but unfortunately, he was kidnapped by the notorious pirate, Skulls, while he was showing her the Armeria flower for which she was named. Seeing Skulls' 'God of Death' tattoo on his chest, Armeria swears to herself that one day she'll rescue Luce from the hands of the pirates. Eight years later, she disguises herself as a boy and joins Skulls' crew to search for Luce, but the truth of what happened to her childhood love is not what she thought it was.

While singing to herself, Armeria is shot by a crew member who mistakenly believes that she is a siren come to sink the ship. Skulls rescues her, but as the crew is examining her wound, they discover her to be a woman. Her true gender exposed, she reveals that she has come to find Luce, only to be told by Skulls that Luce is dead, having killed himself long ago. She refuses to believe him and vows to keep searching. That night, the pirates attack a treasure ship, and Armeria is disgusted by the blood and murder involved in the pirate trade. Although Skulls points out that the treasures were being sent to the king to finance the war, Armeria insists that he cannot justify his actions, as they are for his own ends.