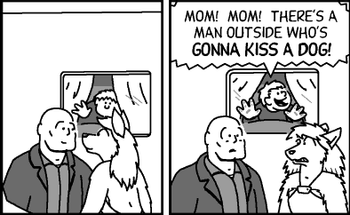 Actually, she's a wolf, and she was going to kiss him. Get it right, kid.
* p4 has joined #hynes
<Opius>So i stroke and stroke and stroke, and it does nothing
<Opius>then all of a sudden it goes nuts and puts white shit all over my work
<p4>i wont ask
— qdb.us #33726

(abridged) spoiler Opius is talking about the stroke tool in Photoshop.
Advertisement:

In other words, it's Less Disturbing In Context.

Note: If the film/show you're watching contains only one such scene, then your parents/grandparents/significant other/etc. will, with 100% certainty, walk in on you just when it happens to be on.

Subtrope of It Makes Sense in Context. Compare Superdickery, Stab the Salad, Grossout Fakeout, and Stab the Scorpion (for situations that are deliberately set up to appear disturbing when taken out of context). Contrast Fridge Horror (for situations that get more disturbing when the implications sink in). Bonus internet points if "It's Not What It Looks Like" is uttered. Contrast Worse with Context where something is even more disturbing in context.