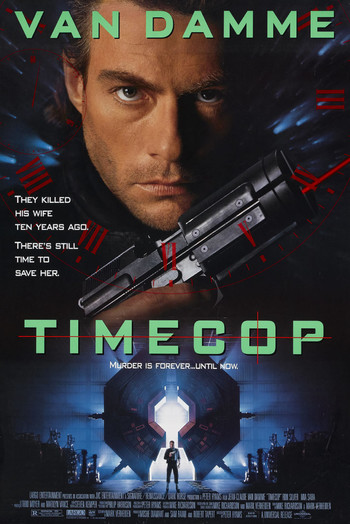 Go ahead, make his day... he's got all the time in the world.
"Turn back the clock, and you're history."
— Tagline
Advertisement:

Timecop is a 1994 movie based on a one-shot comic published by Dark Horse Comics, starring Jean-Claude Van Damme as Max Walker, a (wait for it) Timecop who has to go back in time to prevent other people from going back in time and messing up history. Mia Sara was cast as his wife Melissa, who dies in the opening act, resulting in Walker's zealotry in his job:

"If I cannot go back to save her... this scumbag is not going back to steal money!"

At no point in the movie are there any legitimate reasons for time travel, implying that the only reason for time travel is to prevent other people from using time travel. This is actually a plot point. Butterfly of Doom means that attempting to Set Right What Once Went Wrong would have disastrous side effects, so about the least dangerous thing you can do with it is either go back and steal things with advanced technology or make investments in the past that you can cash in on in the present. And even this is risking some bizarre accident that could kill billions. So aside from the highly risky (and unprofitable) archaeological possibilities, the technology has no productive use, resulting in the titular Cops. One politician even suggests that they simply re-invest the program's funding into tougher regulations on the technology — but he's really only interested in stopping Walker's interference in his own time travel shenanigans.

It had a short-lived spin off show, Timecop: The Series, which featured a brand new cast and lasted for one season of nine episodes. There was also a direct-to-DVD sequel Timecop 2: The Berlin Decision (2003), taking place 20 years following the original.

Example of:
Never the Selves Shall Meet